Peter Paka Paratene: Ask Me Anything

There are some amazing people in Aotearoa living with aphasia. One of them, Rawiri Paratene, is returning to the stage one final time to say goodbye to the crowds that have supported his performance career spanning nearly 50 years. 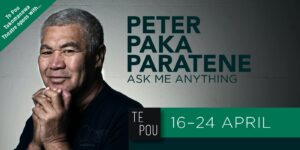 Rawiri has had 3 recent strokes. He now lives with aphasia. But despite now struggling with his words, he is refusing to let aphasia stop him from giving back to the community that gave him so much.

Rawiri (aka Peter David Broughton ONZM, aka Paka) has graced the world’s stages and screens in iconic performances such as Koro in Whale Rider and his world tour of Shakespeare’s Globe to Globe. You might be familiar with Rawiri if you or your children grew up in Aotearoa in the 1980s (Rawiri presented Play School an iconic educational show for pre-school children). Or, you may remember him as Joe from Shortland Street!

But in Peter Paka Paratene: Ask Me Anything, Rawiri will share his own poetry, songs and favourite classical works as he regales the audience with stories of the three distinct phases of his life; Peter, Paka and Paratene.

Rawiri’s swansong show at Te Pou Theatre in Auckland runs from April 16-24. The show will also be available as a digital theatre work for people outside of Auckland.

For whānau with and affected by aphasia and AphasiaNZ’s Friends and supporters, you can use the discount code REO for 20% off the normal ticket price for his Auckland shows.

For more information about Rawiri and the show, click here.

This is not a show you will want to miss!